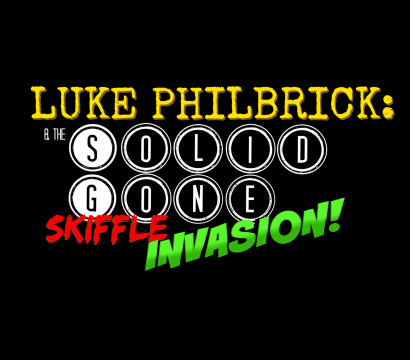 Hailing from Gloucestershire, in South West England, Luke Philbrick and the Solid Gone Skiffle Invasion have built up a strong local fan-base and always leave audiences wanting more during their many travels throughout the UK and Europe. Performances often feature homemade instruments, improvised jam sessions and a dynamic line up sometimes just featuring Luke Philbrick himself for a more stripped-back approach, all the way up to seven or so performers if the audience wants to party on into the night!

Recorded on a shoestring budget in the kitchen, Luke Philbrick’s debut album 'The Kitchen Sessions' is out now available exclusively at live shows and via download from http://lukephilbrick.bandcamp.com/releases; recently signed by the Germany-based ‘Songs and Whispers’ record label, it will be available in its entirety on Spotify and iTunes from 4th October 2019. The band recently acquired a home recording studio and is currently in the process of recording an ambitious collection of songs ranging from flamenco-influenced ballads all the way to filthy blues-based field hollers and Spaghetti-Western-styled film scores. Keep your eyes peeled for news and sneak-previews.

Reviews for ‘The Kitchen Sessions’:

‘Luke Philbrick is an exciting young UK performer who has hooked into the 1930’s Mississippi gritty Country/Folk Blues era to give us thirteen tracks, mixing originals amongst re-arranged traditional material which has resulted in a raw sounding but very accomplished debut album. If the title is to be believed the album was recorded at home in Luke’s kitchen on a shoestring budget, given this the results are remarkable, especially the way Luke’s stark vocals have been captured, there is almost an eeriness to them and the opening song John the Revelator is a perfect example with its call and response style, this track also highlights Luke’s acoustic work on the resonator guitar, I have always admired Andy Roberts version of this song but Luke’s version is definitely up there with it especially as it has a less structured feel to it. Support on the album is provided by family and friends, particularly worth a mention is harp player Mike Lee who does a fine job on several tracks particularly on In My Time of Dying where the mournful content of the song is really enhanced with wailing harp, of the original material the song The Stolen Generation is a standout, it is so emotional with Luke finding a tremble in his vocal delivery that sounds chilling against the backdrop of gentle guitar plucking. All the material sits well together and represents the darker side of acoustic Blues, I cannot see Luke singing any joyous music his vocal style is suited to the raw emotional sounds of the early Blues, with such strong vocals taking centre stage you forget that behind them there is some superb guitar being played on a variety of instruments that includes some very tasty slide guitar. This album appears to have been recorded several years ago but is clearly doing the rounds again; you should not miss this opportunity to grab a copy, as it represents the most authentic acoustic Blues I have heard for a very long time’ - Adrian Blacklee, Blues Matters Magazine March/April 2019

'This is pretty raw stuff - epitomised by opening track 'John The Revelator' with its brash call-and-response vocals and resonator guitar accompaniment' ... ''In My Time Of Dying', however, sees the addition of Mike Lee's harp to deliver an almost funky take on the traditional gospel number' ... 'The first original track 'The Stolen Generation', a sad tale of giving up a baby for adoption, is much softer with delicate, vibrato-laden vocals and solo guitar accompaniment, while second new song, 'Stand Tall', dealing with slave labour in the cotton fields, introduces Philbrick's solid slide-work' - Morgan Hogarth R2 (Rock 'n' Reel) magazine, Nov/Dec 2016

'Solid Gone are one of the best original blues influenced outfits I've heard in years. They add elements of gospel, skiffle, jazz and even funk to the mix in creating their very own box fresh sound. Fronted by the immensely talented Luke Philbrick (once heard is never forgotten) - Luke has a great authentic blues voice which is enhanced by his home-made guitars and resonator using age-old techniques. The sound that the combined unit produces should be set in the 30's dust-bowl mid-America instead of Longlevens Gloucestershire. Unlike some modern day blues their tempo is up-beat, and they engage with almost any audience that recognises the integrity of what they are trying to achieve - from intimate club-type environments to full blown festivals and everything in between' - John Drummond (Brewery Blues).

‘The tops for me was a band called ‘Solid Gone’ from Gloucester …..superb …! heavy duty boogie in some sort of order ...sort of Bluesy .....but not.....sort of Gospel but not......I'd describe them as Bad Ass Hombre Boogie I reckons!.. a just simply superb band …really awesome players and a drummer like a steam hammer…..please go see them !’ - Robert Mark Smith (Bob Smith & Demob)

‘You guys have such a phenomenal energy and are really inspiring. Hope to see you again.’ … ‘I’ve toured all over America and I have to say I’ve never heard a better male singer than you’ … ‘It was an almost spiritual experience’ … ‘I was absolutely obsessed by the Kitchen Sessions’ - Various comments (Facebook and related social media)

Behind the Barn Festival - Drefach Felindre

The Frog and Fiddle - Cheltenham

The Cellar Sessions (The Louisiana) - Bristol

Booked as part of a 'Folk This' night...

The Mother's Ruin All Dayer - Bristol

Busking throughout the day with Damon T

Supporting Snog the Dog for their EP launch!

Part of a University of Gloucestershire Cider festival

Supporting the Dusk Brothers for their EP release

w/ Damon T and the Black Diamond Express to Hell

Part of the Chillie Festival!

Frog and Fiddle - Cheltenham (Support for Brushy One String)

Support for Brush One String!

For the Love of Music Festival - Gloucester

Busking in the Street!

It's Not the End of the World Festival - Leamington Spa

The Bottle of Sauce - Cheltenham

Funkadelic with JDPL and Food For Thoughts

A Tribute to Damon T: The Old Bell - Gloucester

Part of the Brewery Blues Tribute to John Drummond who passed away recently... more details tba

An immersive theatre night with yours truly as the moody whisky drinking Blues man...

The venue has stopped doing music on Friday nights so this will be rearranged for a Thursday night in the not-too-distant future...

Being rearranged for another date tba

To raise money for the NHS

All dayer with camping etc!

Provisionally cancelled depending on how theologian goes

In memory of Damon T, all proceeds to charity.

On the High street with the UP THE BUG boys x

w/ half of Uphill and Still, Jack Davies and his new project and Robyn - basically lots of dop dollar musicians :) time tba

Provisional date as it was rearranged due to the Corona Virus outbreak... time tbc

The Blues Collective - Liskeard (The Albion)

The Blues Collective - Liskeard (The Albion)

Folk at the Folk - Gloucester

Busking for the waterways folks...

Solo set with Up the Bug, Reuben Lovett and Dog Mundane

Supporting Josh Windmiller and the Sam Chase Trio over from America

Cancelled due to Covid

Last minute show to replace our cancelled Gather show... this'll be a bit of a busking set from 6-9 before the DJs come on x

part of the folk trail...